Yesterday a filme I worked on here and there over the past months premiered. It is a docu-info-fiction-drama called Krefeld, Geheimnisse der Seidenstadt. The Movie promotes the different forms of industries based in the former city of silk and discloses a lot of secrets to a wider audience. My brother Stefan played the major character, a "star guide", that leads the viewer through the movie. It was created by Matthias Heuser and Mica Crossmedia. I supplied eight pictures showing an outlook on what the city of Krefeld might look like in three hundred years from now... 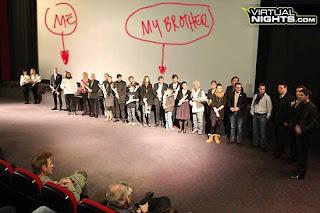 Little Me in the crowd on stage after the movie 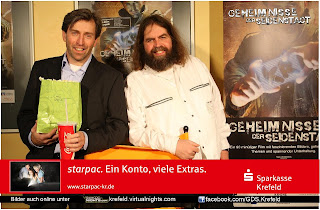 me on the left and my brother, the main actor
All pictures are copyrighted by Mica Crossmedia, Krefeld, Germany
Eingestellt von ChristophHeuer um 05:48